Top 10 Strongest Wood in the World 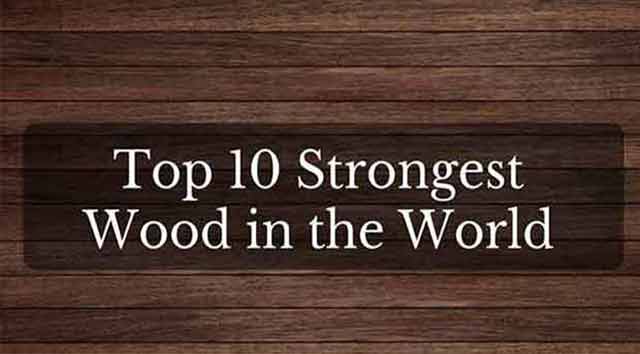 The choice of the most appropriate material for home or even office improvement, crafting, and other projects require precision and maximum care. Not just any wood species will give you premium results. One of the most important considerations when choosing the most appropriate strongest Wood. It is worth noting that bland and straight-grain woods will generally always be stronger than their wavy and complex woods.

The main gold-line used in choosing the strongest wood is in considering the grain patterns and the heartwood. The grains need to be so tight as to increase the density of the wood which automatically improves the strength. Heartwood on the other side is the wood that is milled from the heart of the tree. This is always the strongest and hardest part of ﻿﻿any tree.

Janka rating is used to quantify the hardness of the wood. This industry-standard rating rates the resistance of wood to wear and denting invariance of account of the direction of the grain with the measure of strength and hardness being pounds-force. Below are the top 10 strongest wood in the world.

Top 10 Strongest Wood in the World

This is among the most iconic trees in the world, mainly found in the tropical. It is a hardwood that is included in the Verbenaceae family and has been used for ages as a major hardwood for furniture making and other carpentry works. Having originated from South East Asia, the Teak is capable of attaining a height of up to about 30 to 40 meters. The tree has very outstanding longevity, having a lifespan of up to about 100 years, with the tree having to shed its leaves annually as part of its life cycle.

This is one of the attributes that makes it very outstanding when it comes to varied weather changes withstanding capabilities. It is also characterized with high flexibility degrees that necessitates for bending under windy conditions thus making it difficult for the tree to break under such harsh conditions.

The strength of the teak can be attributed to a number of aspects, notably, the presence of oil in the heartwood that lightly resists water. As a result, you can always trust furniture made using timber from this tree. Woodwork products made of this tree are decay-resistant, antibacterial, and insect tolerant as a result of this attribute. It is interesting to note that though strong and hard, the tree is characterized by a combination of thick fibers and content that makes it easy to cut through, or even sculpture its timber.

In a nutshell, teak is considered one of the top ten strongest wood in the world because of its resistance to all-weather, insect repellence, decay resistance, solid fiber, elasticity, and aesthetic appeal.

This is an ironwood tree, a native of Australia. By its virtue as the hardest wood in the world, it will obviously not miss out on the list of the top 10 strongest woods in the world. Australian Buloke is characterized with a hardness of up to about 5,000 lbf, with a 69 lbs/ft3 average dry weight. Upon maturity, the tress attains a height of up to 9 to 15 meters and 30 to 60 centimeters girth.

Heartwood assumes a reddish-brown color with somewhat light yellowish brown sapwood. Lace-like patterns that are well defined are produced on the quarter sawn surfaces with the rays being so large thus an elegant attribution. With no characteristic odor, the wood is highly celebrated in Australia.

The only limitation of the wood is that it hasn’t spread so much to other corners of the world other than in its Australian native. Other countries and region have stuck with some other ironwood tree options.

Recommended Read: What Is Parawood?

This is yet another type of hardwood tree that’s found in the genus Carya comprising about 1 species. These are mainly natives of China, Indonesia, the USA, Mexico, India, and Canada. They produce hickory nuts, which are very delicious and nutritious. Hickory wood is categorized among the strongest in the world because of how stiff, hard, dense as well as shock-resistant they are.

Though some woods may be stronger than this kind, with others still being harder, the combination of hardness, stiffness, toughness, and strength characterized with hickory is only unique to it and not found in any other wood on the planet earth. Such quality has made it to be a choice timber for use in a number of artworks e.g. for tool handles, drumsticks, golf club shafts, ski bottom, carts, and wheel spokes, etc

In addition to timber, hickory has constantly been gaining fame as the﻿﻿ wood of choice when it comes to wood-burning stoves as well as in chimneys. The high energy content of the wood is credited for the increased popularity of the wood for such wood burning reasons. It is also interesting to note that hickory is also very durable as well as rot resistant, an aspect that makes it sometimes to be used as a wood flooring of choice.

There is no way that a list of the strongest wood in the world can go without mentioning maple wood. Maples are mainly trees capable of attaining a 10-45 meter height, with other species being shrubs that are less than 10 meters in height. The shrub species have some small trunks that originate at the ground level.

Maple is so strong that it has influenced a number of countries and nations to recognize it as a formidable symbol within their dictates. For instance, its leaf is on the Canadian court of arms as well as on their national flag. The tree has been chosen as a Canadian national tree because of its strength and endurance.

Dried wood is commonly used for food smoking with other uses being the derivation of maple syrup as well as being cultivated as ornamental crops. The very large maple species are sources of some of the most valuable timber on earth, with Sugar maple specifically being outstanding in the North American continent. On the other side, sycamore is a formidable maple wood in Europe.

Its wood is mainly used in making butcher’s blocks, baseball bats, blowing pins, cutting boards and pool cue shafts among others. Maple is also one of the most preferred woods for use in the construction of musical instruments. It is its tonewood feature- capability of wood to carry sound wave appropriately- that makes it to be preferred.

Like maple, oak wood can also be obtained from oak trees or oak shrubs, with roughly 600 oak species having been discovered, most of which are mainly found in the USA. The wood derived from oak trees is about 0.75 g/cm cubed in density. This creates a great hardness and strength characteristic.

Together with the strength, the wood is preferred by many because of its resistance to fungal and insect attack due to the high tannin content that’s inherent in the wood. That isn’t enough; oak wood comes with some appealing grain markings thus automatically qualifying the wood for aesthetics. Such qualities are highly sought after for use in the construction of buildings as well as in carpentry work that include the production of barrels used in carrying wines and spirits, making of floors as well as making of bedroom and lounge furniture among others. Japanese oak is one of the main sources of wood used by Yamaha in the manufacturer of Yamaha Drums.

The hardwood is also characterized with high energy contents, an aspect that has led it to be a preferred wood for use in the smoking of meat, fish as well as other foods.

Mahogany is one of the most popular hardwoods for making furniture and hardwood doors. Mahogany produces a kind of wood characterized with straight-grains and reddish brown color. Mahogany wood is mainly derived from three main mahogany species namely the Honduran, the West Indian/Cuban mahogany or the Swietenia humis.

Mahogany wood is relatively free of the void pockets characterized with a number of hardwoods. When polished, the reddish-brown color of mahogany displays a reddish sheen thus an elegant appeal is realized. Among the hardwoods, mahogany is one of those kinds that offer excellent workability.

The wide girth of the tree provides favorable timber for use in the crafting of furniture, cabinets as well as doors, etc. Mahogany is also very durable and rot-resistant hence its preference as a boat construction wood. It is also a tonewood thus is often used in the manufacture of musical instruments mainly the necks, backs, and sides of electric and acoustic guitars. Drum shells are also popularly constructed using the strongest wood.

There are a myriad of cedar tree species used to extract cedar wood. In general, cedar wood is a hardy and fast growing tree that’s ideal for use in hedges. They are mainly natives to the western Himalaya Mountains as well as the mountains of the Mediterranean region. Cedar trees are capable of growing up to an average of 40 meters with some trees occasionally growing up to 60 meters in height.

The cedar woods are very hard, with a spicy-resinous scent being a distinctive attribute. The resins make the wood to be resistant to fungus, Bacteria as well as insects. Together with the strength, hardness and toughness of the wood, this feature has made cedar wood to popularly be used in fencing.

Cedar trees are very ornamental with the ultimate cedar oil and cedar wood being credited for their natural repellence to moths thus the preference of the wood in lining of chests and closets where woolens are stored.

Under its belt lies over 700 different varieties, most of which are endemic to South Australia. Eucalyptus varieties have widely been spread and introduced to a wide range of landscapes throughout the world leading to their dominance in some of the regions. For instance, groves of this species have encroached the Californian native stands of redwoods and grasslands. Eucalyptus can be recognized as honorable kings because of a number of reasons.

The species are strong enough to provide essential food and habitat for the koala bears. They are also attributed to their strong medicinal and aromatic value hence the constant use of their essential oils in soaps and lotions. And to a carpenter, the eucalyptus trees grow super tall, straight, hard and having a wide girth thus making them some of the best timber for furniture making.

With an origin in South and Central America, the Brazilian Walnut has a grain pattern that varies between the interlocked or irregular to the straight grains. The wood has a 3684 janka hardness rating that is among the highest in the world. This makes it a choice of strongest wood for a number of indoor and outdoor projects. Landscape seats, cutting boards and knife handles are just some of the furniture that is made using the Brazilian Walnut wood.

This is a native of Cameroon, Gabon, Angola, Nigeria as well as the republic of Congo. Its natural habitat is in the tropical moist lowlands where it thrives well. The African Pear wood is characterized with a 3680 lbf Janka hardness rating, which makes it ideally as strong and as hard as the Brazilian walnut. It is commonly used in making of both the outdoor as well as the indoor furniture. It is also used as a burning wood for cooking in its native countries.

There are a number of hardwood﻿﻿﻿﻿﻿s in the world. It is however worth noting that not all the hardwoods maybe strong for everything. Whereas maple may be one of the strongest and the best for use in making cutting boards and other kitchenware, mahogany is the strongest when it comes to making of furniture among other products. All in all, the most important thing is for you to do your research and know what the best wood would be for your project before making a choice.