How To Make A Homemade Router Lift 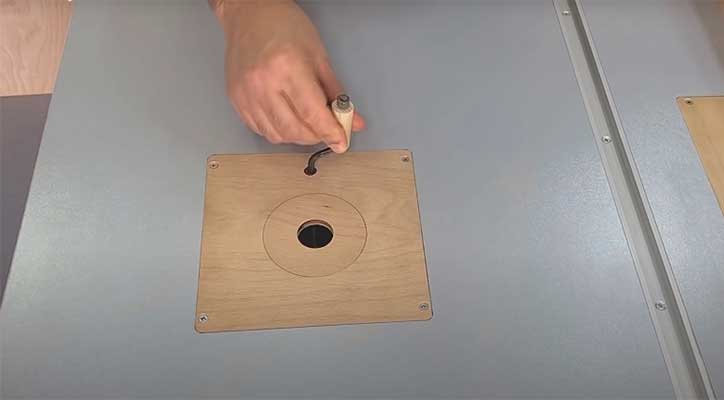 Router lift is very useful for the people who want to do something with the wooden stuff. It works along with a router table and it is useful tool.

There arises a question that when a person has a router table why does he need a router lift?

Well the answer is that it is a handy tool as it allows you to adjust the height of the bit from above the table. Router lift is available on commercial level but it is an expensive tool. A normal router life will cost you more then 400 $ which is a big amount so here are the steps with the help of which you can build your own homemade router lift.

First of all you need to build the side posts of the lift. For this purpose you will need two pieces of 3 quarter inch hard maple and they must be laminated together. After this you need to cut them into a proper size.

Now you need two 3 quarter inch maple pieces which are half the width of the side posts and these are called runners. These two pieces would move inside or out of the side posts while the lift would be in working position.

Now with the help of the saw blade you would have to cut a “v” shape all the way through the runners. Now take 6 set screws which are going to be present in the runner. Now take one of the screws and file a groove in it to make a tap to settle the screws.

After this you need to put a hole in the side posts which is a bit smaller in diameter as compared to set screws. Now the screw you put the groove in needs to be put in one of the holes and with the help of a hex head bit ad drill it down in the hole to make the threads. Now put the other screw in the hole and it would fit in.

Now you need the base of the lift. For this cut out a wooden polygon and marks the holes to put in 5 sixteen inch screws. You need a one inch hole too for guide bushing. Now put all the stuff together in a 2 by 4 spacer blocks. As the holes are all the way down from the base into side posts so the screws must be put in and tightened. So now the spacer blocks can be removed and the base is ready. Now put a 3 quarter inch inside bushing in the base so the rod can sit into it.

Now take a thick wooden block to be the carriage. In this block there must be couple of notches made to fit the runners. Now the “v” shaped runners should be glued in these notches. Now take a 3 quarter inch rod to make a hex head on it to fit in the socket. This would lift the wood router up and down.

Now the carriage would go in the ide posts and down to the base but the hole in the base must be aligned with another hole in the carriage to fit the rod. Now you need to cut the carriage into two parts to make the clamps. Now the router needs to be fit inside the two clamps. Now your homemade router lift is complete and you can make it fit into your router table.

As the commercial router lifts are too expensive so this homemade router lift is the best solution. This router lift does everything which can be done by the commercial one but it costs less. Here is a video which contains all the details of this process and watching it would help a lot.